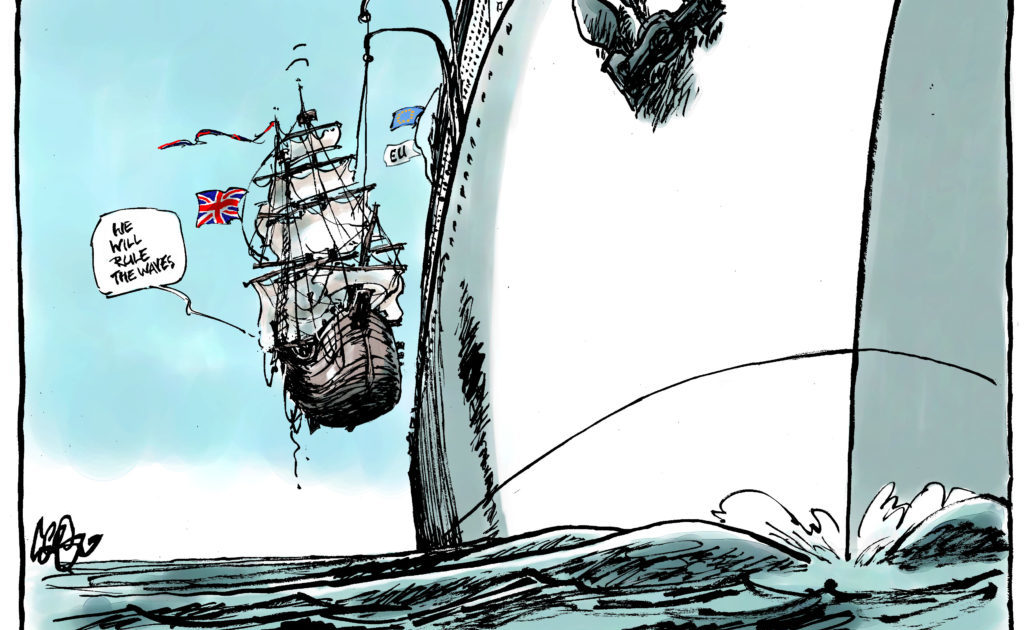 There is little hope that the Brexit-process will end well. However, recent events in Catalonia suggest a wonderfully elegant way out.

As the tide begins to ebb and Brexit looms ever larger, those in command of Her Majesty’s Great Britain show no signs of having plotted a course or even having settled on a destination. While senior officers are openly squabbling on the half deck and backstab each other below, the ship’s complement is getting restive. A few have begun to contemplate jumping ship, others wish to put out today rather than tomorrow. Most have doubts about both the uncertain journey and their leaders.

“If the journey will lead into uncharted waters anyway, who needs maps and courses?” someone as optimistic and ambitious as first mate Mr. Johnson might object. But the fact remains that if Captain May won’t pull up her socks, the cables that keep her dreadnought safely moored to the European quay will inexorably be cut at noon on 29 March 2019, setting the vessel adrift into the sunset, out at sea for the first time in 45 years. It won’t be a pretty sight from any point of view.

Not surprisingly, there are faint signs of mutiny already. The Scots in the fo’c’sle are grumbling. And that’s not all. Things are brewing among the midshipmen too, some of them suggesting they should escape in the longboat and leave the rest on board to their fate. Even the mayor of London, Sadiq Khan, has hinted at the possibility of the capital cutting loose from the rest of the country and going for independence. Half in jest, apparently, but still.

In Khan´s city there is a staunch majority of some 60 percent opposing the breakup with the European Union. But in spite of its status as an economic and cultural behemoth, it is not very likely that London could wrest itself from the control of an unwilling state any more than Catalonia was ever able to break free from Spain. Moreover, if it did, as a new state it would automatically put itself outside the EU, defeating the purpose – someone, by the way, should inform those cantankerous Scots in the fo’c’sle about this, for they’re in the same boat.

You are reading this article for free, but you might consider contributing a small amount to help me write more stuff like this (or completely different stories, there’s nothing like a nice surprise).

Both London and Scotland thus find themselves in a bizarre double bind: if they go with the rest of Britain, they’ll be out of the EU against their wishes, but if they try to avoid that by cutting themselves loose, they’ll be out even faster. It’s enough to make a latter day Lenin sigh “Shto delatsh?”, what to do?

As things stand, the answer seems far from clear. Britain has become a deeply divided nation full of mistrust, where either half of the population will certainly be blaming the other for the inevitable serious damage Brexit will bring, even in the unlikely event of a relatively smooth, controlled divorce. Worse, this is precisely what they have been doing ever since the referendum. And this time the dividing lines don’t conform to traditional socio-economic distinctions, they run right across them, splitting classes, friends and families, and so eat away at the social fabric of the nation. Internecine strife is the albatross circling the rigging.

And yet there may be a solution. Apart from Hadrian’s Wall, there is one other relatively clear division between remainers and brexiteers which can be used to give the large majority of people what they want: the city versus the country. Urban Britain with its international companies and institutions and its global perspective on culture and society predominantly wants to stay in the EU. The majority of country people, more locally oriented and interested in going back to fox-hunting and eating pub grub without EU-busybodies sniffing around among the pots and pans, wants out. What if, in view of the utter lack of consensus among the British, the whole separation process were turned around and the brexiteers were granted their separatist wish? The British “countryside” would be allowed to break away from Great Britain and found a new independent nation, say Midsomer England. What remains of the United Kingdom – roughly greater London, Scotland, and perhaps Northern Ireland, which fears the stifling border problems inherent to Brexit – will simply carry on as a member of the European Union.

This way, most of the present difficulties vanish into thin air. Recent events surrounding the Catalan declaration of independence have shown that Midsomer England declaring independence will be considered an internal British matter by the EU and its member states. This means that the procedures of Article 50 can be stopped forthwith. Also, without a true Brexit, there will be no separation fee to be negotiated or paid. Or if there is, that too will be a matter for the British to sort out among themselves.

Even better, Europe might be more disposed to grant Midsomer certain privileges and special deals to help it on its way. Other than that, the viability of Midsomer England need not bother the rest of us too much. After all, it is their own wish to break away. They get what they want, including the right to build fences to keep out unwanted strangers, and the rest can keep what they hold dear.

You can show your appreciation by donating a small amount below. If you wish to support me on a monthly basis, click here.